The 1980’s looked like a great time to be alive – despite only being born in the middle of the 90’s, I have always had a soft spot for the decade that came before, and this is largely down to the fact that 1980’s films are THE BEST.

Seriously, films made in the 1980’s are generally amazing, unique and definitely not the sort of thing that would get made today. Even though they were made before I was even born, I find characters in these movies to be much more relatable than most of what I see on screen today (spending my early teens wishing to be Hilary Duff did not make me Hilary Duff). One of the crown jewels of the film industry in this era was the teen movie genre, which had its very own brat pack and was helmed by the likes of John Hughes (how a grown man had such a keen insight into the inner psych of teens is a mystery).  This was a decade that graced the world with everything from Wall Street (1987) to Ghostbusters (1984), but I maintain that teen movies from the 1980’s cannot be beaten. This is not a takedown of Mean Girls (2004) or any other post-80’s teen movie, but instead a testament to the era where Molly Ringwald knew what was up.

Trying to compile just five of the best teen movies from the 1980’s proved to be a hugely difficult task, but here it is for you to enjoy – let me know if you agree in the comments section!

I’m just putting this out there – Heathers is one of my favourite movies of all time. The jet black satire that put Winona Ryder on the map is, in my opinion, one of the most hilarious and incredibly ahead of it’s time films to emerge from the 1980’s, and the likes of Jawbreaker (1999) and Mean Girls outright wouldn’t exist without it. The film tells the story of Veronica (Winona Ryder), a teenager who is part of the school’s most popular clique, populated by three girls named Heather (Shannon Doherty, Lisanne Falke and Kim Walker – plastics eat your heart out). Resenting the high school jungle, Veronica becomes involved with the mysterious new guy J.D (Christian Slater channeling a young Jack Nicholson, it’s all in the eyebrows), who has some pretty interesting ideas on how to deal with high school. The film is satire at its very best, with spectacular dialogue (“Dear diary, my teen angst bullshit now has a body count”) and truly fantastic central performances, Heathers is not a film for the easily offended, but it perfectly sums up some of the more ridiculous aspects of high school culture in a way that still feels relevant today. The only reason it didn’t make the official top five is because it is a satirical depiction of pretty much all the teen movies that were made in the 1980’s, and should thus be judged as a thoroughly different (but equally excellent) beast. 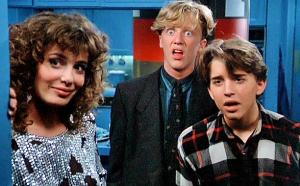 There is apparently a remake of Weird Science in the works, and if this is true it should be stopped immediately because it is one of those concepts that worked in the 1980’s but is actually sort of weird and outdated and there should be no attempts to redo it. Got it, Universal? A lot of films from the 1980’s have this air of nostalgia and innocence around them that allow them to pull of some pretty creepy concepts (Back to the Future, anyone?), and Weird Science falls into that category. The film tells the story of Gary (Anthony Michael Hall) and Wyatt (Ilan Mitchell-Smith), two nerds who create the perfect woman (Kelly LeBrock) on a computer. It really shouldn’t work, but with Hughes writing and direction and Hall and Mitchell-Smith’s adorable performances it does. It’s hardly going to change your life, but Weird Science is a cult classic that makes perfect Friday night Netflix viewing – watch out for an extremely baby faced Robert Downey Jnr. playing bully Ian. 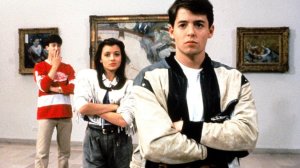 Where to begin really – Ferris Bueller’s Day Off is pretty much the embodiment of everything that is so great about 1980’s films – and mainly it’s a whole lot of fun. Chicago teen Ferris Bueller (Matthew Broderick) decides that he fancies a day off school and constructs an increasingly elaborate scheme to remain undetected, getting his girlfriend Sloane (Mia Sara) and best friend Cameron (Alan Ruck) along for the ride. They spend the day getting up to all sorts of shenanigans, from visiting art galleries and restaurants to being part of a parade, all whilst Ferris’ sister (Jennifer Grey) and Student Dean (Jeffery Jones) try to catch him out. What makes the film so great is that it explores some interesting themes whilst still being a fun caper – Ferris may be the fourth wall breaking character of the title, but the film is really about the emotional journey of Cameron. Let’s face it – more people (meaning me) identify with Cameron than Ferris, and his realisation that he has to learn to stand up for himself in order to be happy is something that a lot of teens have to deal with, so it’s nice that John Hughes was around to give a helping hand and prove that strong messages can come in fun packages. 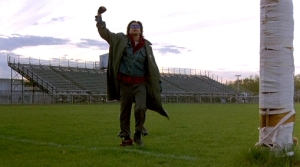 “…In the simplest terms, in the most convenient definitions: a brain, an athlete, a basket case, a princess, and a criminal.” Back in 1985 John Hughes made his masterpiece with The Breakfast Club, a film that so perfectly embodies everything he was about as a maker of teen movies and a film that anyone can identify with anyone – and thus, the brat pack was born. Five teenagers are stuck together in the school library for an all-day Saturday detention. All from their own cliques, it seems like they have nothing in common, yet over the space of the day they transcend their respective stereotypes to become THE BREAKFAST CLUB, all while Simple Minds play in the background – it really doesn’t get much more 1980’s than that. Parodied so often, it can be easy to forget how great The Breakfast Club is (imitation is the sincerest form of flattery after all), and no matter whether you consider yourself to be the athlete (not so much) or the basket case (getting warmer), you’ll find something to love in Hughes’ film. 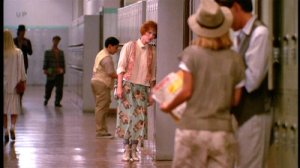 I know what you’re thinking, a film on this list NOT made by John Hughes?! But panic not, he wrote Pretty in Pink, so of course his stamp is all over it (thank god). Andie (Molly Ringwald) is a working class girl who has a crush on rich boy Blane (Andrew McCarthy, of course you’re rich when you’re called Blane). Throw into the mix her adoring best friend Duckie (Jon Cryer) and Blane’s dickhead friends Benny (Kate Vernon) and Steff (James Spader), along with Andie’s unemployed father (Harry Dean Stanton) and boss/mother figure Iona (Annie Potts) and you have a recipe for some class-A high school d-r-a-m-a. It’s another Hughes classic, and Ringwald is as good a role model as there is with her refusal to change for anyone – us gals can take a lot away from her performance, and even if you don’t agree with the ending (it was actually changed due to the original ending – which arguably makes a lot more sense – didn’t go down well with test audiences) chances are you’ll still go all gooey when Andie gets the guy.

Director: Joel Schumacher (pre-ruining everyone’s lives with Batman and Robin in the 1990s)

Here it is – my number one 1980’s teen movie. Many may disagree, but I love St Elmo’s Fire for a multitude of reasons, and an undying affection for young Rob Lowe is only one of them (equally strong affection for Andrew McCarthy makes two). Telling the story of seven college graduates navigating that tricky period between graduation and starting your real life, the film gets a lot of stick. I feel this is partly due to the fact that after the travesty that was Batman and Robin (1997), Joel Schumacher and his work have a very dark cloud over them. The thing is, much like all 1980’s teen movies, I don’t think its a film that needs to be taken all that seriously. Sure, Demi Moore totally overreacts about losing her job – but as someone who is on the cusp of entering her early twenties I feel pretty sure that my self-absorbed self would probably have a similar reaction – it’s called being young. It’s a coming of age tale that is just so quintessentially 80’s that to hate it isn’t something I can fathom – granted Emelio Estevez’s storyline is a tad creepy and Andie MacDowell is nothing short of awful, but who says it had to be perfect – there are faults with all of the films on this list, but that doesn’t stop me loving and steadfastly defending each and every one.