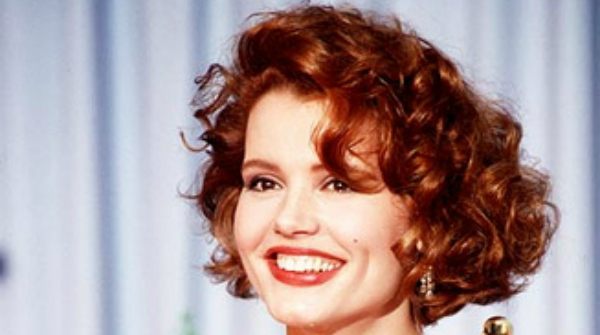 Every Friday A Peerie Yarn will look at a different female role model. They may be a role model for any reason at all, from a music legend to a fantastic author, and the piece will explore what it is that makes them someone to look up to.

Geena Davis was born in Massachussets in 1956. She gained a Bachelor’s Degree in drama from Boston University in 1979 and began working in acting from the 1980’s.

She has three kids with Jarrahy, a daughter, born in 2002, and twin sons, born in 2004. In 2009 she was awarded an honorary Doctor of Fine Arts degree from Bates College.

“I haven’t even gone to any Mensa meetings.”

Davis refers to herself as an actor, believing that the word “actress” will soon be dated in the same way as “doctress” is today. This pursuit of equality is also reflected in her choice of roles, with Davis becoming known for carefully choosing her roles.

She bagged herself a Best Supporting Actress Oscar in 1988 for The Accidental Tourist, as well as gaining another nomination in 1991 for Best Actress in Ridley Scott’s Thelma and Louise. The former is Davis’ staple work – a roadtrip/buddy movie that subverted pretty much every trope from the respective genres and created something that screamed girl power.

Other roles included the baseball film A League of Their Own (1992)  and pirate caper Cutthroat Island (1995), proof that Davis refuses to be put into the typical boxes so many females working in the movie industry are.

She played a female President of the USA in ABC’s Commander in Chief, which ran for one season over 2005-2006.

Whilst her acting work has taken a backseat as she has raised a family and become more involved in activism, she is due to star in the film adaption of Marjorie Prime alongside Jon Hamm.

“If you read someday that I have signed up to play Sean Connery’s kidnapped wife, then you’ll know I’m broke.”

Davis became interested in archery in the 1990’s and in 1999 was one of 300 women who went for semi-finals berth in the US Olympics Archery Team to participate in the Sydney 2000 Summer Olympics.

She placed 24th out of 300 and whilst she did not qualify she participated as a wild card entry in the Sydney International Golden Arrow Competition.

“Archery is something that I took up later and didn’t know I had a natural aptitude for.”

Davis has become hugely prolific in her activism and research since the early 2000’s. She fronts the Women’s Sports Foundation and launched a campaign called “Geena Takes Aim” which advocated gender equality in sports opportunities.

She became even more interested in gender equality when watching children’s programming with her kids. She noticed the extreme gender imbalance and the worryingly sexualised nature of female characters appearances.

It was because of this that she paired with Dads and Daughters in 2005 to push for a balancing of the numbers of male and female characters in children’s TV and film. In 2007 she launched the Geena Davis Institute on Gender in Media, which launched the biggest research project on gender in the media to date.

The Institute published its findings, such as the fact that the ratio of male to female characters in Hollywood is 3:1, and Davis continues to speak at events all over the world to promote equality.

In 2015 she launched the Bentonville Film Festival, an event which was focused on promoting diversity in film.

“Six year old girls have already learned to see themselves through the male gaze.”

Geena Davis is a massive role model for women – not only did she dedicate her career to making careful choices which allowed her to play a variety of progressive and strong roles, but she then went on to become part of the solution by spearheading the most expansive research into gender representations in media.

Davis has spent her entire career proving that no women – or person – should be put in a box. We can all be a whole range of different things, just as Davis is a wife, mother, actor, activist and archer, and her long and varied career is a testament to that.

“There are woefully few women CEOs in the world, but there can be lots of them in films. We haven’t had a woman president yet, but we have on TV. How can we fix the problem of corporate boards being so unequal without quotas? Well, they can be half women instantly, onscreen. How do we encourage a lot more girls to pursue science, technology and engineering careers? By casting droves of women in STEM jobs today in movies and on TV. Hey, it would take me many years to become a real nuclear physicist, but I can play one tomorrow.”

What do you think of Geena Davis? Share your thoughts in the comments section!