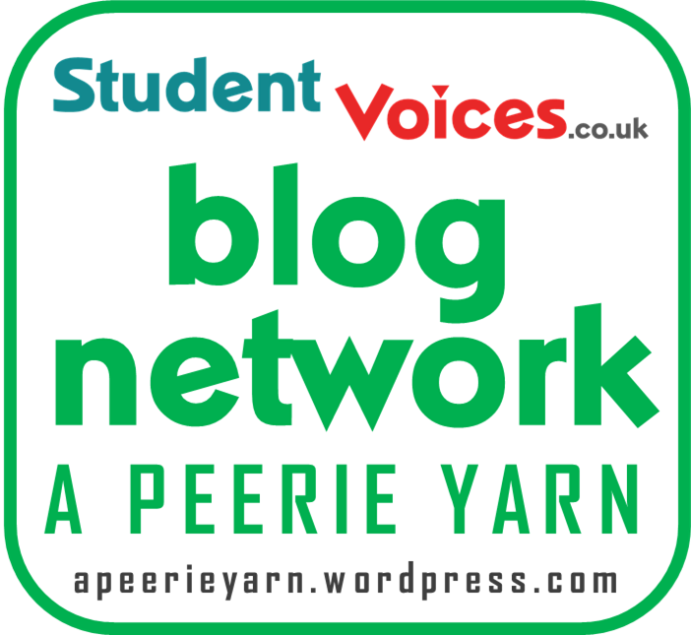 Hollywood isn’t really a place for original concepts anymore – pretty much any big moneymaker is a remake, reboot or a re-imagining of some description. This can come across as anything from greedy to pointless, and it can really make us cinema-goers quite cynical, but that’s a whole other can of worms. The fact is, there are so many remakes being talked about all the time that it’s hard to know which ones will even see the light of day (getting a movie onto the big screen is a very long and complicated process), but here are five remakes which are in development that you might not know about…

Is it happening?: Good question – the It remake was announced way back in 2009, and it has been a rocky road ever since. The project began life at Warner Bros before being moved over to subsidiary company New Line. Headway seemed to be being made when Cary Fukunaga, the man behind the critically acclaimed first season of True Detective (2014) signed on to direct and the surprising decision to cast young British actor Will Poulter in the iconic role of Pennywise the clown – made famous by Tim Curry – was made. The film was firmly in pre-production, with Fukunaga working on a script alongside Chase Palmer, but was dropped into development hell again when Fukanaga pulled out last year citing studio tampering. Mama (2013) director Andy Muschietti has since been attached to a project, and a new script is reportedly in the works, but it is unclear if or when the film will see the light of day.

Will it be good?: Stephen King adaptions tend to be a bit of a mixed bag – for every The Shining (1980) you’ve got a Bag of Bones (2011) – so this one could go either way. Such a troubled pre-production could have a knock on impact on the final product, and it is hard to predict how it will turn out until the major players are fully confirmed. That said, Poulter has proven his credibility in a range of genres from comedy in We’re the Millers (2013) to drama in The Revenant (2016), so there is no reason that he can’t pull off Pennywise in spite of the inevitable endless comparisons to Curry’s performance.

Is it happening?: A remake of Alfred Hitchcock’s 1963 classic The Birds has been in talks for years, but developments last year suggest that it might finally be happening. Screencrush reported that Michael Bay is set to produce the film via his production company Platinum Dunes, whilst Dutch director Diederick Van Roojen is currently attached to direct. Platinum Dunes will produce the film with Mandalay and Universal. Whilst this seems like real moves towards the film finally getting made, there is still a long way to go – back in 2007 Naomi Watts was in talks to star with Martin Campbell of Casino Royale (2006) fame in the directors chair, but by 2009 the project had stalled.

Will it be good?: Bay’s production company has been behind numerous horror remakes over the years, from The Amityville Horror to The Texas Chainsaw Massacre, and it would seem that even Hitchcock’s classics aren’t safe. Many horror fans consider The Birds untouchable, and the decision to remake it is one that is unlikely to go down well. Pair this with the fact that it would be being produced by the guy who is responsible for the Transformers franchise and who has a penchant for blowing things up in his movies, and the chances of the remake being any good are decidedly low. On the plus side, Bay isn’t in the directors chair, and Van Roojen may surprise us all by not allowing him to stamp his identity all over the place, but it is probably for the best if this particular remake remains deep in development hell.

Is it happening?: It certainly looks like it – details are still pretty thin on the ground, but last September The Guardian reported that Elizabeth Banks has signed on to produce and direct a Charlie’s Angels reboot based on the original 1970’s TV series starring Farrah Fawcett, Kate Jackson and Jaclyn Smith. Banks is also set to produce the film alongside her husband and production partner Max Handelman, whilst Evan Spiliotopoulos is said to be writing the script, suggesting that the pieces are slowly falling together to make this remake a real possibility.

Will it be good?: There’s every chance it could be. Banks is a hot property in Hollywood right now, making her directorial debut with Pitch Perfect 2 to Box Office success last summer, as well as acting in The Lego Movie (2014) and The Hunger Games franchise (2012-15). The original series was based on three women who face institutional sexism in the police force and go to work for the titular Charlie where their skills are put to better use, a premise that still (depressingly) holds real credence. The  Charlie’s Angels film in 2000 starring Lucy Lui, Cameron Diaz and Drew Barrymore was successful enough to spawn a sequel in 2003, proving the the concept also has financial potential. Writer Spiliotopoulos is mostly known for penning a vast array of Disney’s DOV sequels, but he also has credits on the upcoming The Huntsman Winter’s War and the live action Beauty and the Beast, so there’s no reason he can’t pull it off.

A STAR IS BORN:

Is it happening?: It’s still early days, but it looks like it. The idea for a THIRD remake of the original 1937 film of the same name has been in the pipeline since 2011, when it was reported that Clint Eastwood was set to direct with Beyonce Knowles as the female lead previously played by Janet Ganor, Judy Garland and Barbara Streisand. Negotiations with Beyonce fell through in 2012 and it looked like the project was being put on the back-burner by Warner Bros until last year when it was announced that Bradley Cooper is interested in the project as his directorial debut. As it stands, Cooper has quashed any Beyonce related rumours and looks set to direct, star and co-produce the film.

Will it be good?: It has potential. Cooper is one of Hollywood’s most sought after leading men, so whilst it is almost a given that he will be great in front of the camera, it will be interesting to see what he can achieve in the director’s chair. A strong female lead is an absolute must – will he perhaps try to entice his frequent co-star and friend Jennifer Lawrence into the role? Other than that, it’s hard to know at such an early stage with so few details – will the film be a period or contemporary piece? The story – about a woman who becomes famous as her lover’s career flounders – is universal and could be applied to the modern generation in an interesting way given the right script.

Is it happening?: It certainly is. Sony announced plans last year to remake 1996 cult classic The Craft with Leigh Janiak writing and directing. Doug Wick, one of the producers of the original, is on board to co-produce alongside Lucy Fisher, and whilst a cast has yet to be announced the ball seems to be well and truly rolling on the project.

Will it be good?: Again, information is still hard to come by at this stage, but all the indicators point towards the film being in safe hands with Janiak, who is a rising star in the horror genre after her directorial debut Honeymoon in 2014. The female centric original was a supernatural teen film with endless cult appeal, and it seems only right that a rising female director take the helm on the remake. On the downside, it is only ten years since the original came out, and there are a lot of questions about the need for a remake so quickly, if at all.

What remakes are you worried or excited about? Let me know in the comments section: 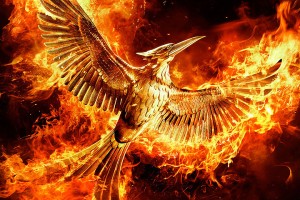 The fact that The Hunger Games has managed to become a franchise heavyweight that can stand proud aside YA juggernaut Harry Potter is quite exceptional. Whilst audiences grew up with the boy wizard, with the series spanning ten years and eight films, The Hunger Games arrived on our screens a mere three years ago. Based on the first in Suzanne Collins’ popular dystopian triology, The Hunger Games (2012) is a far cry from what the franchise has ended up as with Mockingjay: Part 2.

The first film, directed by Gary Ross, wasn’t your conventional YA franchise movie, and whilst Mockingjay: Part 2 is certainly much more of a franchise product, that’s not to say that it is overtly bad. Katniss Everdeen (Jennifer Lawrence) has proved to be one of the most important franchise leads to come in a very long time. The rise of the character can be seen to run parallel to that of the actress who plays her, with Jennifer Lawrence now finding herself to be one of the biggest stars in the world, and a role model to many. The same can be said for Everdeen – the franchise, and this final installment in particular, has been hugely successful in avoiding the pitfalls of stereotypes – and the Mockingjay is a fully-fledged, three dimensional character who is both strong and vulnerable.

The positive portrayals don’t stop there, and Mockingjay: Part 2 is all about the girl power, from the excellent Effie Trinket (Elizabeth Banks) to Johanna Mason (Jenna Malone), there are no end of kick-ass female characters throughout, and it is this that makes the franchise revolutionary in a sense. There is no want of veteran talent on display, with Donald Sutherland providing another terrific turn as President Snow, as does Julianne Moore as Alma Coin.

However, as tends to be the case with a major franchise, with so many memorable characters and plot threads coming into play the film can at times feel like a greatest hits, with characters appearing briefly to tie up a plot point. Obviously there are more tragic circumstances behind the lack of Phillip Seymour Hoffman, and it is bittersweet to see him shine in his reworked but extremely plot-important role. The only real character we get to see develop is Katniss and perhaps Peeta (Josh Hutcherson), whilst Liam Hemsworth is generally sidelined as Gale – an Twilight-esque scene which sees Gale and Peeta discuss Katniss is one of the few missteps in the film. 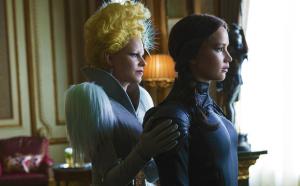 It did not come a surprise when Lionsgate announced plans to split the final book in two, but Part 2 has managed to avoid the entire film being a cumulative battle (a la Harry Potter). The film picks up where the previous installment left off, with revolutionary war is in full swing across Panem. The series has always skirted around the very outside of its 12A rating, and this is no different – some of the more jumpy moments would not be out of place in a horror movie. The no-holds-bar approach has always been important, with the films providing commentary on the nature of war and violence. The message here is particularly poignant, and the traditional YA structure is again deviated from – in the world of Panem there is no such thing as straight up good or evil.

The ending is ultimately a crowd-pleasing one, but it also feels like the natural one considering the developments of the characters over the course of the narrative, so it’s hard to make any real complaints. As a big-budget franchise finale, it ticks all the boxes, as well as providing food for thought that is not always present in YA adaptions (looking at you Twilight). Not for those looking for the arthouse experience, but Mockingjay: Part 2 is a worthy end to a progressive franchise.