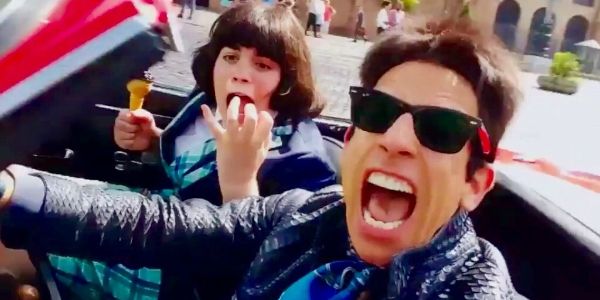 When Ben Stiller’s Zoolander hit cinemas back in 2001 the world was still in shock over 9/11, but over time the film has become a comedy favourite due to the biting satire of the world of high fashion and the hilarious performances from Stiller, Owen Wilson and the ever-hilarious Will Ferrell.

Cut to 15 years later and the world is a very different place, and Zoolander 2 at least has the sense to acknowledge this, making it one of the main themes. In order for the sequel to move forward, the opening montage informs us that the happy ending we saw at the end of the original didn’t last and that Zoolander has become a “hermit crab” after his Centre For Kids Who Can’t Read Good and Want to Learn to do Other Stuff Good Too collapses, killing his wife and scarring Hansel (Owen Wilson), as well as losing his son.

Comedy sequels are notoriously hard to pull off – they usually either end up being a retread of the original, or they go way over the top. Zoolander 2 falls into the latter category, which isn’t great considering the original was already pretty out there. With 15 years between the films it really begs the question – was this film necessary? Sure the fans might have wanted it, but that doesn’t mean it’s a good idea (hence why there should never be a Friends reboot). It feels much like the same situation that arose with the Anchorman sequel – the original is so beloved that unattainable expectations were never going to be met.

Another reason I don’t understand why this sequel has come about is the character of Zoolander himself. The guy literally has no personality beyond being dumb beyond belief, and it’s funny to an extent, but it’s lucky that he managed to carry one film, so why bring him back for another? Why couldn’t the guy just have that happy ending that we all saw at the end of the first movie? It’s not like there’s any character development on display here.

But, anyway, as unnecessary as it may be the film does exist, and unfortunately it can’t claim to be much more than mediocre. Sure, it raises a few laughs, but the extremely talented cast are wasted on average material – Kristen Wiig in particular, who’s weird accent is meant to be funny but never quite lands.

The whole point of Zoolander was to lampoon the fashion industry, but it feels here like the script is going for anything but the fashion industry. Hipsters? They get it pretty bad. Celebrities? The film opens with Justin Bieber being riddled with bullets. But the fashion industry? Not so much. The original film was so biting in its satire – think the bulimia jokes – and everything we see here is just a pale imitation.

When you have so many cameos from members of the fashion industry you’ve probably lost your bite, and that’s what has happened here. Speaking of the cameos, they deserve a whole section dedicated to them alone. Anyone who finds the plot insufferable could make a game out of celebrity spotting – they don’t all work, but some of them do raise a laugh, such as Willie Nelson (!?) and Keifer Sutherland.

Zoolander 2 feels like a frantic attempt to emulate everything that made the original so funny, but ultimately it doesn’t have the bite and, whilst far from being unwatchable, these are characters that were probably best left in 2001.

2011 was hailed as the year of change for women in comedy. With the release of smash hit Bridesmaids, which made over $287 million worldwide, it seemed that Hollywood was finally taking note regarding the depiction of female characters in comedy. For years women have been sidelined in the genre, usually appearing as one-note depictions or romantic interests to further the agenda of male characters, and it seemed as though the tide was finally turning.

Funnily enough, it’s taken a further four years for this change to really come to the fore, with 2015 seeing a string of mainstream female fronted comedies proving to be hugely successful. Spy and Pitch Perfect 2 are particularly lucrative examples, bagging well over $200 million each at the worldwide box office. Other films such as Hot Pursuit were of more dubious quality, but it is still great to see attempts being made to shake up the status quo. Then of course there was Amy Schumer shaking up the tired rom-com format with Trainwreck. It is also worth noting that the more typical male driven comedies of the year have been much less successful than Spy and Pitch Perfect 2 – Kevin Hart’s vehicles Get Hard and The Wedding Ringer were average performers, whilst Entourage and Hot Tub Time Machine 2 underwhelmed both critics and the box office.

There are some exciting prospects on the horizon, with Amy Pheloer and Tina Fey coming together for Sisters at the end of the year, an all female Ghostbusters on the horizon and a female driven comedy by the writers of the hilarious Broad City. Whilst there is certainly room for more diversity, with Sofia Vegara of Modern Family fame being one of the few ethnic stars to appear in any of the years comedies, these are all steps in the right direction.

What is so notable about these films is its depiction of women as fully rounded, human characters. Films such as Feig’s The Heat (2013) and Spy are taking movie scenarios so typically inhabited by men and putting women at the helm. Spy is perhaps the best example, providing a hilarious yet empowering take on the tired spy format. These are all films that pass the Bechdel Test – which requires females to have a conversation not to do with men at some point in a film. This is a positive step away from the Sex and the City style chick flicks of the early 2000s, as whilst there is nothing inherently wrong with those sorts of films, they should not be the only way women are depicted in female-centric cinema.

This could finally signify a change that has been a long time in the coming. Dubbed the Bridesmaids Effect, we are finally seeing female driven comedies take their rightful place in the mainstream. Paul Fieg, a director who is deemed to be a part of this revolution for his work with Melissa McCarthy, has said: “it’s an amazing sign of progress, but it feels a little silly to be celebrating it. It’s good, but it’s not enough. And this should have happened years and years and years ago.”

This is an interesting and wholeheartedly valid point – the fact that this is a big deal in 2015 is frankly ridiculous, and it’s still too early to tell if it is a permeanant development. It’s an area that has certainly seen a few false starts. Geena Davis – who made the news recently when she spoke out to highlight gender inequality in Hollywood – appeared to be kick starting a revolution back in the early 90’s with Thelma and Louise and A League of Their Own, so why has it taken another 20 years for the trend to take hold?

Quite simply, like everything in Hollywood it comes down to money. Before Bridesmaids there was nothing to convince studio executives that people would pay to see these kinds of movies. For far too long Hollywood has catered mostly for the teenage male, meaning that women are generally depicted within the limited guise of male fantasy. Whilst this trend in comedy suggests change may be on the horizon, the battle is far from over. We are yet to see a female led comic book movie from either Marvel or DC, and though there are ones in the horizon the balance is way off. Hopefully the financial and critical success of these comedies will help pave the way for progress in other genres too.

Here is Sofia Vergara and Reese Witherspoon discussing female comedy when they were promoting Hot Pursuit – whilst the film was only average you can’t fault this duos talent!: