The Lord of the Rings score was recently crowned the greatest movie soundtrack of all time for the sixth year in a row. The Classic FM poll listed a whole host of classic in it’s list, including Schindler’s list, Gladiator, Star Wars and Raiders of the Lost Ark.

Soundtrack is one of the make or break elements of a film – would Halloween be anywhere near as terrifying without John Carpenter’s endlessly creepy two note score? Would Titanic pull on your heart strings half as much without Celine Dion giving it all she’s got in My Heart Will Go On? The soundtrack is the often unsung hero of so many beloved films, and whilst I would probably have to agree with the ruling of Lord of the Rings as the greatest ever (probably on Concerning Hobbits alone), I have compiled a list of my personal favourites, a few of which depart from the traditional scoring and focus on pop culture instead.

Based on the 2012 novel of the same name, Me Earl and Dying Girl has proved to be one of the surprise hits of the year. Pretty much the anti-Fault in Our Stars, the film is a fantastic breath of fresh air for the YA genre. It is especially bolstered by its soundtrack, which largely comes from the fantastic Brian Eno. As well as Eno, there is a real eclectic mix to enjoy, from Roy Orbison to Cat Stevens. It perfectly walks the line of between hipster and accessible and plays a huge role in the films quirky genius, building up to an incredible finale with Eno’s The Big Ship, which was composed especially for the film. I really can’t stress how great The Big Ship is (listen below for yourself) as both a piece of music in its own right an as a perfect accompaniment to the film. It catches the offbeat, touching atmosphere of the film to a tee – without a doubt the best soundtrack of the year, from one of the best films for that matter. 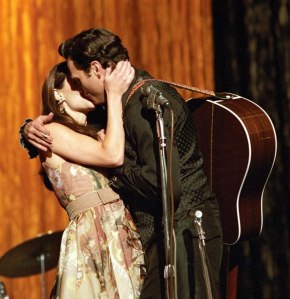 This soundtrack is so good that it won a Grammy, and there is no question why. The 2005 biopic of the late, great Johnny Cash and the love of his life, June Carter is one of my favourite films of all time. This one deserves a place on the list based on the performances of Phoenix and Witherspoon alone – they performed all of the songs themselves, lending the film a sense of authenticity it could never have achieved otherwise. Replicating Cash’s legendary bass-baritone voice is no mean feat, but Phoenix totally inhabits the role and the songs, almost making it look easy. He pays the perfect homage to the man in black with classics such as I Walk the Line, Folsom Prison Blues and Get Rhythm, capturing whatever it is that makes a Cash track so special in the first place. Witherspoon also shines, capturing the charm of June Carter, particularly in her rendition of Wildwood Flower, which is so good it threatens to overtake Carter’s version. There are also some other gems from other artists which perfectly encapsulate the genre and period. The real magic happens when Phoenix and Witherspoon duet on Jackson and It Aint Me Babe, perfectly capturing the chemistry and genuine love that existed between the real life Cash and Carter. Walk the Line is everything you want in a music biopic, and the tunes are everything you want from a soundtrack. 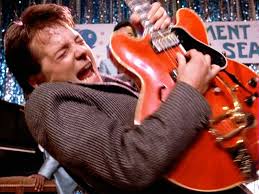 Soundtrack Highlight: Power of Love – Huey Lewis and the News

Anyone who knows me will know my undying love (obsession?) with this film, and the soundtrack is a huge part of what makes it so great. This one is a great mix of songs and score, mixing a suitably cinematic sound with some classic and nostalgic tunes and coming up with something pretty close to perfection (I did warn you of my undying affection for this film). The Outatime Orchestra (named after the number plate of the iconic DeLorean) perform the score, which was composed and conducted by Alan Silvestri – a frequent collaborator of Zmeckis – has a very Speilbergian feel to it (he produced the film), which is always a surefire ticket for success. The film also manages to provide a fantastic time-bending blend of the 1950’s and 80’s, with the Power of Love proving to be the signature song an obvious highlight (fun fact – Huey Lewis plays the judge who tells Marty his band is just “too darn loud” when they play a hard rock version of the song near the films beginning).  And who can forget Michael J Fox rocking out to Johnny B Goode? There is just so much to love.

Another hugely popular soundtrack, this one sold so well that it spawned another album the following year, consisting of songs that inspired the film. Whilst it is also excellent, it will never reach the dizzy heights of the songs featured in Danny Boyle’s cult classic. From Iggy Pop to Lou Reed, the mix screams 90’s and has been most teenagers claim to cool ever since the film came out. Danny  Boyle has always been fantastic at selecting soundtracks – 2013’s Trance is another highlight – and this is quite possibly the pinnacle of his success. Riding the wave of britpop, the soundtrack is an effective blend of the bands of the decade and their predecessors, the soundtrack (and the film) is a product of its time and a gift that keeps on giving. One of the most effective closing songs of all time is Born Slippy .NUXX, the perfect blend of uplifting and trippy, and the beginning of a lasting collaboration between Boyle and Underworld. 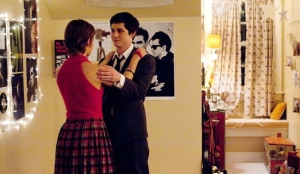 Stephen Chbosky, the author of the 1999 novel of the same name, brought his work to life in 2012 with the film adaption of Perks of Being a Wallflower. Much like Trainspotting, the film is a perfect example of one that captures the era it is depicting. Again it is the early 90’s, but the focus is American high schoolers as opposed to Edinburgh junkies. This is one of my favourite soundtracks ever because it so brilliantly captures the essence of the film – even though there is only one composed piece in the film (Charlie’s Last Letter – Michael Brook) you would easily believe more of the tracks had been specifically written for the film. It is the sort of music the characters listen to, and it allows us to achieve a better understanding of these characters with its mix of soft alt. rock, new wave and dream pop from the late 80’s/early 90’s. Bowie’s Heroes is the perfect song to summarise the main themes of the film, and the tunnel scene where it is played remains electrifying and triumphant on multiple viewings.

Here is a playlist of the 5 best songs from this list, enjoy!